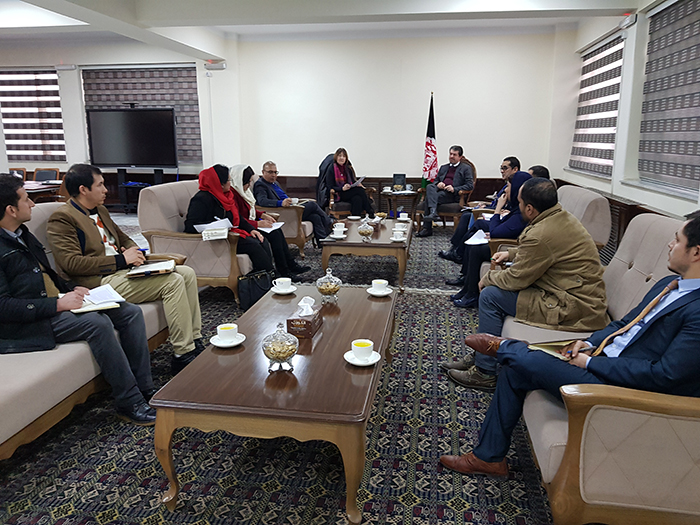 Civil Society Working Committee meeting with H.E Mastoor Minister of Economy and H.E Osmani Deputy Minister of Administration and Finance took place in Ministry of Economy with the aim of improving understanding between the government and NGOs and CSOs. The meeting was attended by representatives from ACBAR, AWN, CCD, ANEC, TEFA, AICS, ACSFo, BAAG and Spokeswoman at the Geneva Conference for Afghanistan (GCA).

The following points were discussed:

1. That the Afghan Government should publicly support civil society, its value and its oversight role, which would be facilitated by a clear definition of civil society.

The Minister responded that he fully accepted the value of civil society and that the government on the whole, and the Ministry of Economy in particular, recognises civil society as a partner which will not only look at the government’s good work. The aim is to have active engagement in the development objectives of the government, including a reduction in poverty and balancing aid through a single NGO fund and reaching rural areas. It was pointed out that stark poverty also exists on the outskirts of Kabul.

While incorrect remarks might have been made in the past about NGOs there have been more regular meetings with civil society since the GCA, (and CSOs were welcome to participate as well as NGOs); the policy committee every 3 months, and the technical and legal committee every month, (there have been 4 so far). EW said that the CSWC and BAAG were planning to review a working definition of civil society acceptable to Afghans which the donors have also said they would find helpful.

2. That incorrect information about civil society be refuted and corrected.

This related to the report produced by the NGO Unit which said that the majority of NGO funding had been spent in Kabul and came about because NGOs had not made clear where the money was spent when reporting. The establishment of a ‘one-stop’ shop to receive reports from civil society organizations (removing the need for a variety of reports in different formats) and examine any complaints they may have

This situation of incorrect information being published has been rectified and the Minister said the Ministry knew the information given was inaccurate and he hopes the 2018 report will provide a more accurate picture of NGO expenditure.

The Minister acknowledged that formats of reports were problematic and Dr Osmani has been working on improving them. They have to be less detailed, only essential facts, and, after consultation with NGOs and a pilot study with 10 of them, it is now possible to report online. It is also possible to access information on other organizations. He was requested to encourage similar simplicity in reports required by other Ministries although Dr Osmani said that theirs were based on donor requirements and that the government needed information from NGOs too, which was not always made available.

3. That necessary information be provided to civil society and dissemination improved, in line with the relevant laws as it was currently very difficult to obtain it.

The Minister accepted that this was a government wide problem and that websites were not always user friendly. EW suggested that if civil society organizations reported their difficulties to Minister Mastoor then he could advocate on their behalf. His agreement to do so was welcomed by those present.

4. That agreed mechanisms of co-ordination with the government should be put into practice, ensuring that civil society voices are taken into account.

The consultation with civil society needs to be raised at a higher level within government, however those within it are very much involved in responding to the peace process of the possible merger of the Ministries Minister Mastoor said was not imminent, if it were to happen at all.

5. That a practical strategy be put in place to fight corruption which would include providing public servant salaries that are enough to live on, resistance to pressure to exclude civil society representatives from the Anti-Corruption Commission and action against any person/organization, (including NGOs) where there is evidence of corruption.

The Minister said there had been some accusations but very few cases and it would be up to the NGO Unit to audit. The civil society response was that it seems difficult for the Ministry of Finance to understand the concept of a ‘non-profit’ organization. He was optimistic that things were improving and Dr Osmani was due to meet the Deputy Minister of Finance that afternoon.

In closing remarks EW said that NGOs and CSOs had been talking about how they might collaborate so that their input to meetings would be built on lessons learned and therefore more relevant. Participants said they welcomed this opportunity to change the image of NGOs and CSOs and they were relying on Minister Mastoor to continue his support.